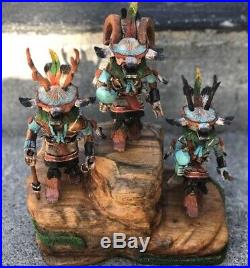 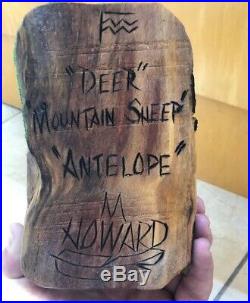 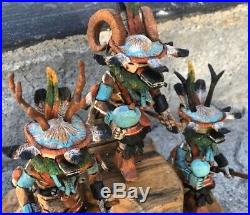 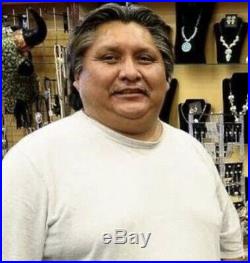 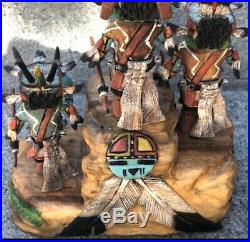 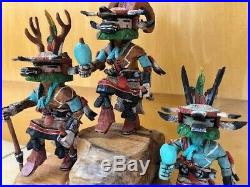 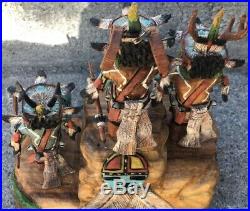 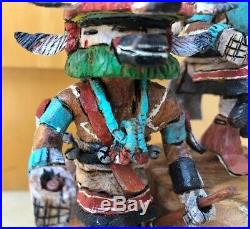 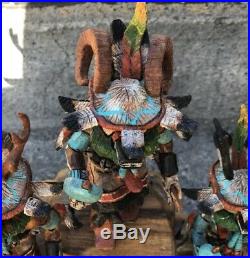 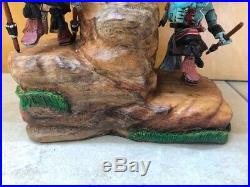 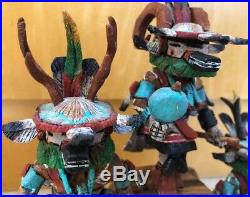 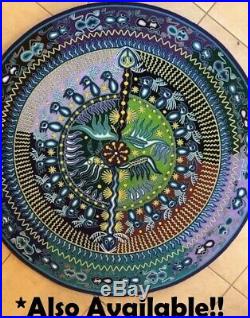 Substantial ONE OF A KIND Hopi SIGNED Carved Collectible! NO DAMAGE, having been properly displayed in my Gallery. Offers will be Considered. PLEASE Excuse the Photos, as they most certainly do not do them justice. IF you need specific photos, please just message me, & I will accommodate your wishes as soon as possible. Milton Howard is one of the most esteemed and highly regarded artists of his generation. Milton was born on the Navajo-Hopi Reservation in Tuba City, Arizona in 1964. His father is from the Third Mesa area, and his mother is from the Rocky Ridge area. Milton eventually moved to Albuquerque, New Mexico and spent his early adult life there, although he currently lives in Arizona. Milton has several grown children now, too. Milton Howard learned his craft from his Father, along with other members of his family who shared his fathers passion. Before launching his career as a full-time carver of Kachina collectibles, Milton Howard gained certification as an electrician. His first sale of a Kachina doll was to a classmate while he was in his early twenties and still studying for his electricians certificate. During this time, he spent much of his free time exploring the art of Kachina doll carving with his cousins, and began to take orders from classmates and friends. Though Milton Howard’s talent was obvious to all those around him, he did not take up carving seriously until he moved to Phoenix. Here he honed his skills as a carver of Hopi Kachina dolls, and his name quickly began to spread as a coveted artist for collectors worldwide. At the age of thirty, Milton Howard decided to dedicate his time completely to his Kachina carving talents. His collector Kachina dolls are now found all around the world in fine art galleries as well as in private collections. Though Howards immense talents are obvious to even the most casual observer, one additional element to his success has been the fact that he offers these amazing pieces at rather modest prices compared to others of comparable quality & detail, so even collectors with limited budgets can own one of his spectacular Kachina dolls. Milton Howard uses only the finest materials, and carves each Kachina doll by hand. Though Milton Howard remains dedicated to the traditions of his heritage, he has also learned to express himself through his collector Kachina dolls with a delightful and readily recognized sense of humor. Many of his Kachina dolls will depict non-traditional scenes, but with accurately detailed representations of the Kachina history he cherishes as sacred symbols of his Hopi culture. SO much thought, work, and time went into the creation of this beautiful, HIGHLY DETAILED Collectible by Hopi Artist, MILTON HOWARD. Featuring Mountain Sheep, Deer, & Antelope Kachina standing upon a mountain at different heights. EACH ONE of the 3 Kachinas are all wearing a Traditional Jaclas Necklace, carrying Walking Sticks, Rattles, and more. Each one is dressed in Traditional Hopi ceremonial attire, complete with fringed Moccasins. Large Elaborate Head pieces featuring numerous Feathers adorn the tops of the Kachinas. The ENTIRE piece is overflowing with colors of the beautiful Southwest- Turquoise, Coral, Terra Cotta, Black, Green, White, & just a touch of Yellow. Milton Howard is a highly esteemed EXPERIENCED Carver. He has produced many pieces over his long & successful career- so you will find many photos of pieces made by him- but you will not see another one like this. Again- PLEASE Excuse the Photos, as they most certainly do not do them justice. Please let me know if you have any other questions, or if I can be of assistance in any other way. The item “RARE! Hopi MILTON HOWARD KACHINA Katsina Doll CARVING Figurine Deer Sheep Jaclas” is in sale since Saturday, October 5, 2019. This item is in the category “Collectibles\Cultures & Ethnicities\Native American\ US\1935-Now\Dolls & Kachinas”. The seller is “southwestflair” and is located in CALIFORNIA . This item can be shipped to United States, Mexico, Bermuda.