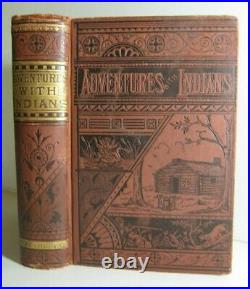 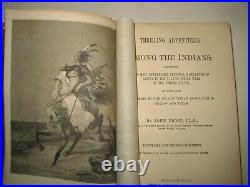 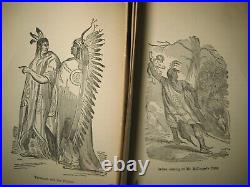 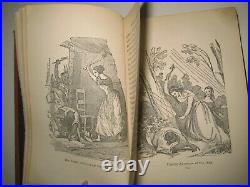 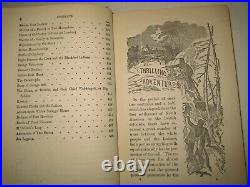 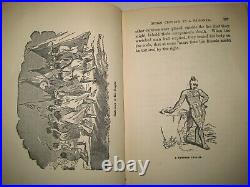 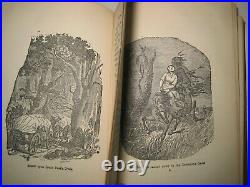 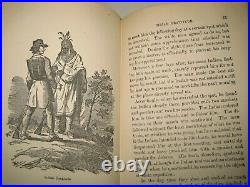 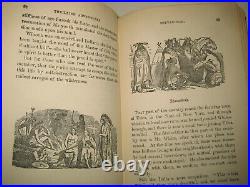 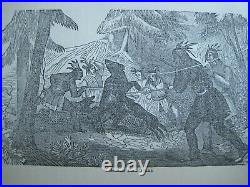 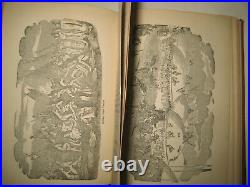 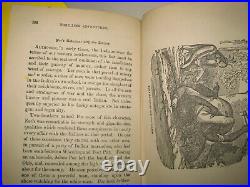 Of antique and rare books. She has lots of great ones. To see my other old books. From the pre-face: The following narratives have been carefully compiled from a large mass of material which has been accumulated during the many years which the author has devoted to the study of American history. They comprise the incidents which were considered most striking and remarkable and best calculated to afford the reader an adequate idea of the Indians their peculiar modes of warfare, and their general character. And, to show you how long ago this book was written. It is a remarkable fact that the Indians, as a mass, remain now nearly in the same state as they were found by the first discoverers of the New World. The western tribes hunt with the bow and arrow; and still make war with the spear and shield. Thrilling Adventures Among the Indians. Pa, John Potter & Co. 7.5″ by 5.5″ with 551 pages. With apx 100 pictures. About half are full page. SEVERAL TRIBES, massacres, captures, escapes, scalp dance, Indian gratitude, camps /villages. Hunting buffalo and moose, adventures, heroism, Indian Chiefs, pipe dance, Indian children, border warfare, and so much more.. Full contents at the very end of the listing… Please zoom in on. Photos carefully as they are part of the description. All of my books are VERY OLD and have 100+ years of wear to varying degrees. Very good to excellent condition…. Boards – very secure, back cover is as clean as the front. Pages very secure. Spine ends – pretty good / some wear. Pretty good / some wear. Inner hinges – pretty good /paper cracked but no webbing exposed. Pages – very clean – only few small spots. Writing – “Frank Arb, from his mom” on the back of the frontis. Rips /folds – 2 small rips that I saw / a few wee tips folded /. Copies of this book are seldom seen in this great condition! PLEASE ADD ME TO YOU “SELLERS YOU FOLLOW” LIST. AND check back now and then to see what’s new! If you have trouble, contact me. It can take up to 14 days to get back East, it’s rare, but it does happen. And remember -this book is very old and may have accumulated bad smells along the way [musty basement/ mildew/ smoke] – I have found that dryer sheets in them for a few months makes a world of difference! As far as I can tell -this book has no bad smell. Taken from the web- their are a few typos. Intro Captivity and Escape of Mrs Frances Scott, of Washington County Virginia Singular Narrative of the Adventures of Captain Isaac Steward who probably saw the gold mines of California before 1782 Singular Prowess of a Woman in a Combat with Indians Thrilling Incidents of Border Warfare in Pennsylvania The Ranger’s Adventure Sufferings of Butler, the American Mezeppa among the Indians Heroism of a Woman Escape of Mrs. Davis from the Indians Singular Execution for Murder An Extraordinary Duel The Maiden’s Rock Shenandoah- Indian Gratitude Daring Feat of a girl during an Assault by Indians The Faithful Nurse Courage and Generosity of Pe-ta-la-sha-roo Magnanimity of a Sioux Noble Action of Lieutenant Beall Massacre at Taos, New Mexico, and Death of Gov. Bent Adventures of Colonel Hays with the Indians Poe’s Adventure with two Indians Captain Reid’s Battle with the Lipan Indiana Fight of Colonel Kinney with the Camanche Indiana Attack on Cherry Valley Major McCulloch’s Adventure with the Camanches Attack upon American Train Companies Massacre of American Volunteers by Indians The rose of Guadaloupe Indian Fishing in New Brunswick Thrilling Adventure at an Indian Burial-place A Striking Scene Treeing a Bear Insurrection of the Pueblos in New Mexico Singular Freak of a Creek Indian Irruption of the Camanches into Chihuahua Attack by the Pawnees Carson’s Adventures with the Indians Battles of American Volunteers with Indians Indian Cruelty to a Prisoner Striking Instance of Indian Patriotism Indian Sense of Propriety Personal Encounter with two Indians The Prophet of the Alleghany Tecumseh McDougal and the Indians Paugos and Chamberlain Indian Children Wanou and the English Officer Burning of Hanna’s Town The Lost Sister of Wyoming Disaster of a Party of Missouri Traders Hunting the Moose The Rifleman of Chippewa The Indian and the Turkey The Indian and the Bear Attack on Haverhill Bobasheela Remarkable Escape from the Indians Massacre at Mimms’s Fort American Forces attacked by Camanchea Beath of Captain Smithy a Santa F6 Trader Adventure with a Party of Yttas Hunting the Buffalo by Stratagem Wonderful Escape of Tom Higgins March of the Sioux The Murderer’s Creek The Scalp Dance- Adventure of an Indian Woman An Indian Lodge Siloufe A Buffalo Hunt Sufferings of Captain Bard’s Family Black Bird Indian Pipe-Dance Escape from Torture Perilous Adventure of Captain Brady Story of Indian Revenge Mandan Bull Dance Singular Scene in an Indian Council Narrative of an Escape from the Indians Early Settlers of Bedford County Indian Attack- on Dover, New Hampshire Indian gratitude for Favours Escape from Indians Murder of a Family in New Hampshire Dance of Ojibbeway Indians (in London) Murder of a Family in Tennessee – Depredations by the Sioux Indian Horsemanship Battle of Oriskany fight between the Crow and the Blackfeet Indiana- Savage Patriotism Farmer’s Brother Indian Bear Hunt The Catastrophe Story of George Ash the Sioux; or Dacotas, and their Chief Wahktageli, or Big Soldier… LIFE IS SHORT -and there are better things to do, feel free to copy my text if it saves you time! The item “1888 NATIVE AMERICANS INDIANS CHIEF MASACCRES SCALPING KIDNAPPED WAR ANTIQUE” is in sale since Wednesday, August 18, 2021. This item is in the category “Books & Magazines\Antiquarian & Collectible”. The seller is “atypical-bookstore” and is located in Sherwood, Oregon. This item can be shipped to United States.