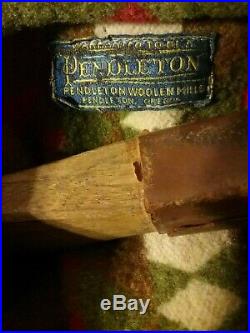 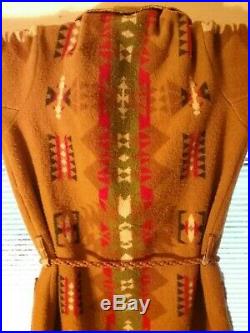 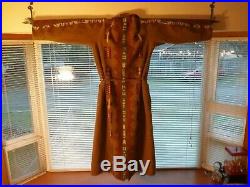 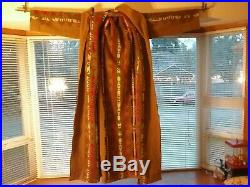 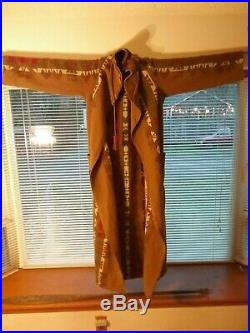 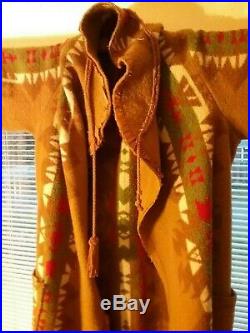 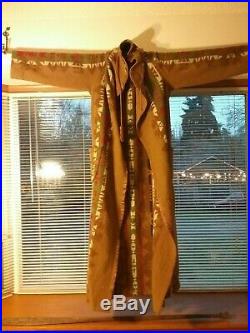 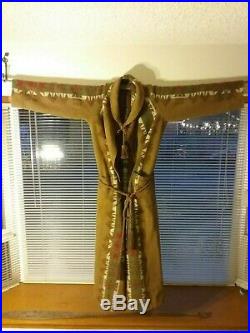 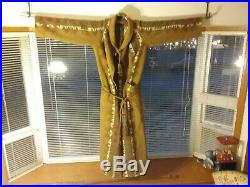 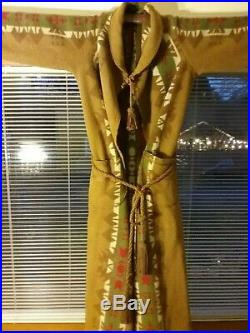 Fabulous large old Pendleton Native American Trade Robe in very good condition. The colors are bright red, green, white, black and brown, no stains or oders. It has some silk edge trim and one collar tassle loss, some minor scattered surface moth grazing. I would say size is large to extra large and it measures approx. 58″ long X 64″ wide… And 60″ across from sleeve to sleeve, the sleeves at about 22 1/2″ long. The Pendleton Label dates it from 1915 – 1920 with an excellent, highly desirable Native American geometric design that many tribes cherished and adored! Wonderful old piece of Pendleton and Native American history! Hurry, this won’t last long I suspect! In 1895, a woolen mill opened in the Oregon town of Pendleton to sell blankets and robes to nearby Native American tribes. The mill went out of business, but in 1909, brothers Clarence, Roy, and Chauncey Bishop, who came from a family of weavers and entrepreneurs, reopened the facility as Pendleton Woolen Mills. Employing the Jacquard loom technology first imported to the U. In the 1830s, Pendleton and other new U. Mills were able to make felted blankets with stunning colors and patterns. Naturally, all the these wool companies looked at the Native American populations, who had at this point adapted wool blankets, often striped or plaid, as a part of their ceremonies and rites of passage, and saw an opportunity. Developing Blanket Designs for the Native American Market. To Pendletons credit, its loom artisan Joe Rawnsley spent a lot of time with the local tribes, such as the Nez Perce, to learn what colors and patterns would appeal to them most in blankets. As a side note, the Nez Perce most associated with the brand, Chief Joseph, who heroically stood up against the U. Government for years, had very little involvement with the company. He was photographed by Major Lee Morehouse wearing Pendleton blankets in 1901, but that seems to have been the extent of his relationship with Pendleton Woolen Mills. Rawnsleys early blankets were well-received by the nearby Nez Perce, so the company sent him on a six-month tour of the Southwest, where he lived with Navajo, Zuni, and Hopi to find out what blanket designs those tribes would prefer. Designs from baskets, pottery, weavings, and other regalia all inspired him, making Pendleton blanket designs a blending of the images and colors he saw through his own design filters. Pendleton Woolen Mills c. It could be said that Rawnsley was simply inspired by the beauty of Native American arts and crafts, and he hoped to use his Jacquard skills to make beautiful blankets that the tribes people would love and use. In that, time has shown that he very much succeeded. From the beginning Pendleton Woolen Mills marketed the blankets to various native communities, but the designs themselves are not strictly authentic, but an interpretation of design elements. It is ironic that that at the time that Navajo were making blankets for the white tourist trade, and Pendleton was making blankets to sell to the native communities. Not just Pendleton, but other woolen mills as well, developed because the market for their weaving was so strong in native communities. These blankets were integrated right away into Native American ceremonies. Pendleton also realized that different communities and different tribes had different preferences for designs or colors. And then they created blankets that different communities would like. The item “RARE ANTIQUE AUTHENTIC PENDLETON INDIAN NATIVE AMERICAN TRADE ROBE 1915-1920″ is in sale since Saturday, March 21, 2020. This item is in the category “Antiques\Linens & Textiles (Pre-1930)\Bed & Bath Linens\Blankets”. The seller is “povertybay” and is located in Federal Way, Washington. This item can be shipped to United States.