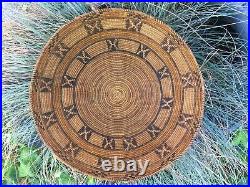 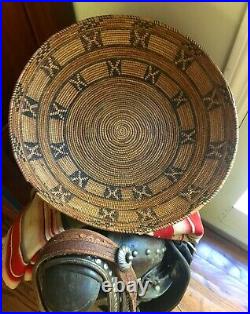 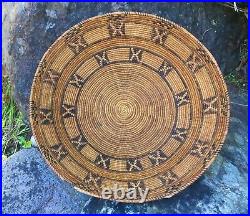 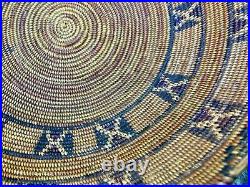 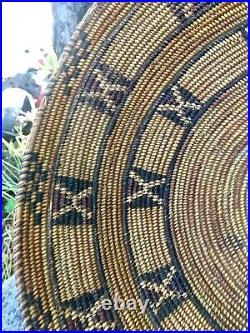 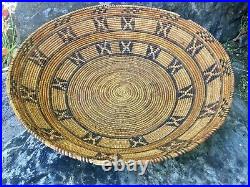 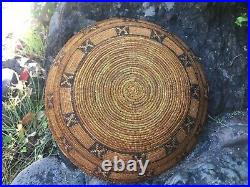 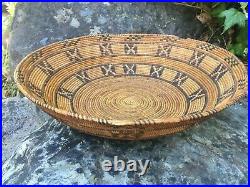 Fresh to the market find! Very rare and antique 1800’s California Native American Chumash polychrome coiled tray. Beautiful symmetrical construction with classic Chumash designs. This basket is a real looker and is even better in person. Pics taken in natural and indoor light. Some light rim damage that doesn’t detract from a basket this old. Across x 3 deep. See pics for details. See pictures for details on condition. We bring to the market specially curated cowboy, Indian, and military items from the Old West and frontier sourced from estates, barns, garages, and anywhere that treasures hide. We do our best to describe and photograph all items, but we leave it to the experts (you) to decide what you like and what you don’t… You be the judge. Was the first European to make contact with the coastal Alta Californian tribes in the year 1542. Cabrillo died and was buried on San Miguel Island, but his men brought back a diary that contained the names and population counts for many Chumash villages, such as. Spain claimed what is now California from that time forward, but did not return to settle until 1769, when the first Spanish soldiers and missionaries arrived with the double purpose of. The Native Americans and facilitating Spanish colonization. By the end of 1770, missions and military. Had been founded at. To the south of Chumash lands and. With the arrival of the Europeans came a series of unprecedented blows to the Chumash and their traditional lifeways. Anthropologists, historians, and other scholars have long been interested in documenting the collision of cultures that accompanied the European exploration and colonization of the Americas. Spain settled on the territory of the Chumash in 1770. Bringing in missionaries to begin evangelizing Native Americans in the region. By forcing Chumash villages into numerous missions springing up along the coast. The Chumash people moved from their villages to the Franciscan missions between 1772 and 1817. Mission San Luis Obispo. Established in 1772, was the first mission in Chumash-speaking lands, as well as the northernmost of the five missions ever constructed in those lands. Next established, in 1782, was Mission San Buenaventura. On the Pacific Coast near the mouth of the Santa Clara River. Mission Santa Barbara, also on the coast, and facing out to the Channel Islands, was established in 1786. Concepción was founded along the inland route from Santa Barbara north to San Luis Obispo in 1789. The final Franciscan mission to be constructed in native Chumash territory was Santa Ynez, founded in 1804 on the Santa Ynez River with a seed population of Chumash people from Missions La Purisima and Santa Barbara. To the southeast, Mission San Fernando, founded in 1798 in the land of Takic Shoshonean speakers, also took in large numbers of Chumash speakers from the middle Santa Clara River valley. While most of the Chumash people joined one mission or another between 1772 and 1806, a significant portion of the native inhabitants of the Channel Islands did not move to the mainland missions until 1816. Mexico seized control of the missions in 1834. Tribespeople either fled into the interior, attempted farming for themselves and were driven off the land, or were enslaved by the new administrators. Many found highly exploitative work on large Mexican ranches. After 1849 most Chumash land was lost due to theft by Americans and a declining population, due to the effects of violence and disease. The remaining Chumash began to lose their cohesive identity. In 1855, a small piece of land (120 acres) was set aside for just over 100 remaining Chumash Indians near Santa Ynez mission. This land ultimately became the only Chumash reservation, although Chumash individuals and families also continued to live throughout their former territory in southern California. Today, the Santa Ynez band lives at and near Santa Ynez. The Chumash population was between roughly 10,000 and 18,000 in the late 18th century. In 1990, 213 Indians lived on the Santa Ynez Reservation. The item “Antique California Coastal Indian Polychrome Chumash Basket / Tray 1800’s RARE” is in sale since Thursday, September 30, 2021. This item is in the category “Collectibles\Cultures & Ethnicities\Native American\ US\1800-1934\Baskets”. The seller is “texasaggiegirl00″ and is located in Loomis, California. This item can be shipped to United States.