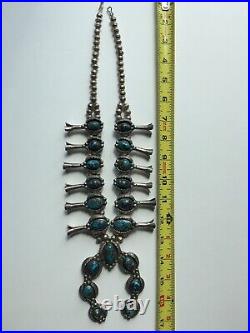 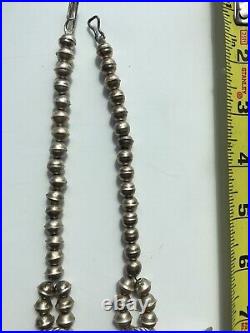 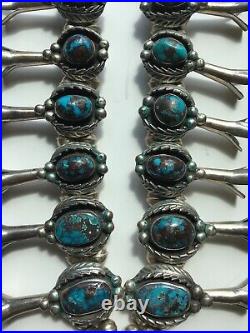 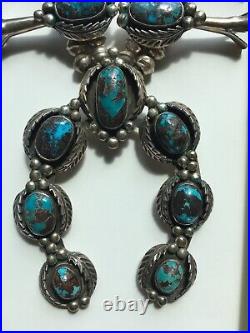 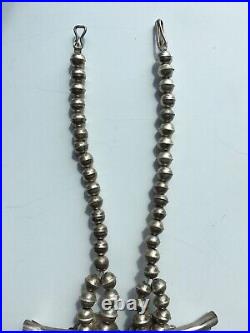 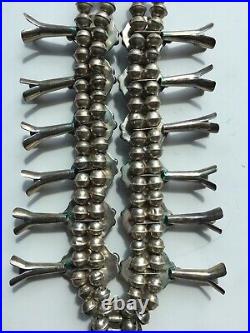 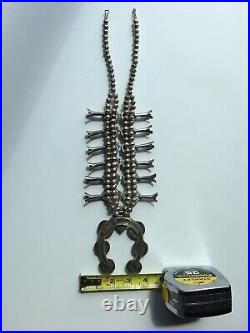 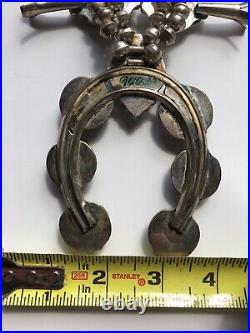 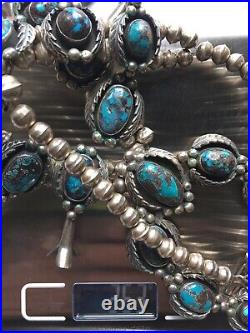 As a child of the southwest during the 70’s, I was lucky to experience many family road trips. My mother had an extreme love for Navajo jewelry, so our stops often included Navajo reservations where silversmiths worked directly with the Chiefs. This is one of those pieces. I remember her only wearing her collection pieces a few times and they spent most of their time safely locked away. This is a very large piece measuring 34 inches and weighing 263 grams. Most certainly one of a kind. I have had a few of her pieces inspected and valued by a respected dealer in Tucson, Arizona. Your squash blossom necklace was made by a Navajo silversmith. The Navajo are a Native American people of the Southwestern United States, and are now known as Dine` which means The People. The term “squash blossom” refers to the blossom shapes attached to the turquoise cabochons. There are several different schools of thought about how the name “squash blossom” came about. The Navajo/Dine word “Chil Bitan” translates to bead which spreads out. The pomegranate was a symbol of Granada and Spain. The Spanish and Mexican men and women who wanted to dress up their appearance would wear a small silver version of this symbol to decorate their blouses, capes, and pants. In addition, this design was also on the buttons of soldiers’ uniforms. The crescent or horse shoe shape at the bottom of the necklace is called a naja. The Navajo/Dine` learned silversmithing from the Spaniards in the early 1880’s, who taught the Navajo this form. The Navajo/Dine` had already borrowed the Spanish crescent moon and star symbol, which was attached to the horse’s bridle on the center of the animal’s forehead. Navajo/Dine’ artists then simplified this theme, often to a plain crescent shape. Silversmithing techniques were brought to the New World by the Spanish and taught to the people of Mexico. By the 1850’s, the Native American peoples in the Four Corners region (Utah, Colorado, Arizona, New Mexico) had acquired some silver work from Mexican craftsmen through trading. The turquoise featured in your squash blossom necklace is Bisbee Turquoise from the “Lavender” Pit in Bisbee, Arizona. The name “Lavender” originated from a politician’s name, not the color of the reddish/brown/lavender host rock. Aside from you indicating to me the variety of turquoise, I examined both the color and host rock to verify the turquoise’s source. Some of the stones appear to be Persian, which is often confused for Bisbee. Persian has a shiny black chert host rock, and is usually higher domed. In this case, these stones do not detract from the value of this squash blossom necklace. From your photographs, the stones in your necklace are natural and have not been stabilized. There are crevasses and an uneven surface across the face of the stones. If the stones were stabilized, those voids would be filled with resin/epoxy. This observation is consistent for the 7 stones in the naja and the 12 stones in the blossoms. It is estimated that approximately 85% of all turquoise has been stabilized and only 15% is natural and hard enough cut and shaped to be used directly in jewelry. The beads in your necklace are called bench beads. Bench beads are partially manufactured and partially handmade. The beads start off as small silver discs, which are hand pounded into a half shell. Two halves are then hand soldered together and holes are then drilled through the beads. This squash blossom necklace appears to have been created in the 1970’s. Leaf embellishments were widely used in the 1970’s. As you may have noticed, prices for squash blossom necklaces in Galleries and on the Internet vary greatly. In conducting my comparables, I pay for subscription websites. These research websites give actual recent sales information of squash blossom necklaces that have similar weight and characteristics of your squash blossom necklace. Fair Market Value is defined as the price one would have to pay for a similar necklace in a retail store. This item is in the category “Jewelry & Watches\Ethnic, Regional & Tribal\Necklaces & Pendants”. The seller is “e51534″ and is located in this country: US. This item can be shipped to United States.