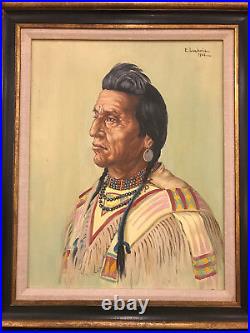 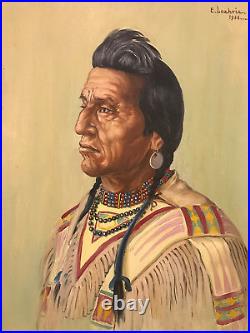 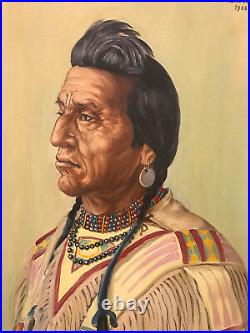 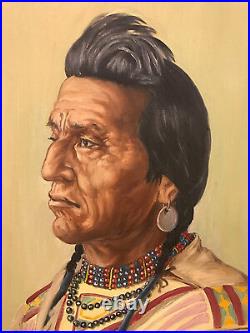 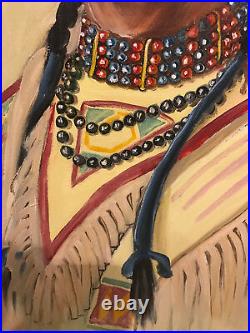 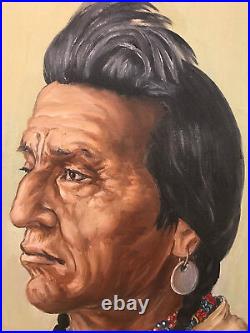 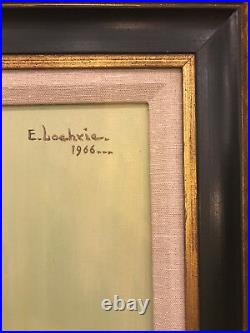 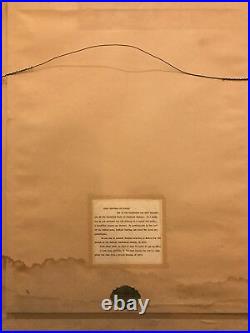 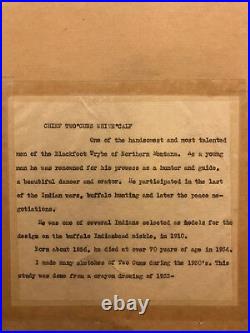 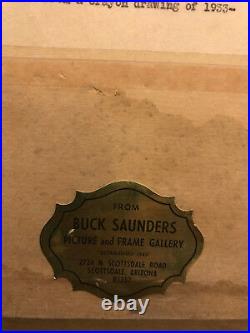 Up for consideration is Extremely Rare Painting of Native American “Two Guns White Calf” by Elizabeth Lochrie. The painting is in excellent condition. Elizabeth Lochrie is listed Monatana artist who has painted Native American’s as her subject. Her paintings are part of many museums in Montana and American West. The subject is a portrait of Native American. The painting is intricate and is very detailed with the focus on on the subjects clothes and jewellery. The medium is oil on board. The painting is signed and date on top right. The size is sight 20X24 inches and 28X23 inches framed. Please contact with any questions and we will be happy to answer. About the Artist: ELIZABETH DAVEY LOCHRIE was born in Deer Lodge Montana, July 1, 1890; she was educated in Butte schools and received her art education at Pratt Institute in Brooklyn in 1911. After 1932, Lochrie specialized in Native American portraits, particularly of Blackfeet tribal members, having produced more than a thousand watercolors, oils, murals and sculptures. She was adopted by the Blackfeet and given the name “Netchitaki” which translates as Woman Alone In Her Way. Additional information of the artist can be found at below links. There is a very interesting mystery. Two Guns White Calf, also known as John Two Guns and John Whitecalf Two Guns, was also, in time, a Blackfoot chief. He provides one of the most readily recognizable images of a Native American in the world as impression of his portrait appears to appear on a coin, the Indian head nickel. His visage was reportedly used along with those of John Big Tree (Seneca) and Iron Tail (Sioux) in James Earl Frasers composite design for the nickel. Notice the chiefs signature in the photo below taken by T. After the coins release around the turn of the century, Two Guns White Calf became a fixture at Glacier National Park, where he posed with tourists. He also acted as a publicity spokesman for the Northern Pacific Railroad, whose public relations staff came up with the name Two Guns White Calf. He died of pneumonia at the age of 63 and was buried at Browning, Montana in a Catholic cemetery. Chief Two Guns White Calf and the Indian-Head Nickel Story, below, was summarized from Twisted Tails, by numismatist Robert R. Van Ryzin, Krause Publications, 1995. John Two Guns was born in 1871 and adopted at an early age by White Calf, a prominent warrior chief who was responsible for many of the Blackfoot Tribes treaties. After the death of White Calf in 1902, Two Guns became a tribal leader. When Two Guns first saw the buffalo/indian-head nickel (released in 1913) he was convinced that it was his own likeness on the coin. However, the sculptor, James Earle Fraser, always insisted that the head was a composite of several models. He specifically named Two Moons (a Cheyenne) and Iron Tail (a Lakota Sioux) and one or two others (in his later years, he mostly said, one other). The Great Northern Railroad, always interested in promoting tourism to its Glacier Park Hotels and passenger traffic on its trains, sought to encourage the idea that Two Guns was the model. The argument raged from 1913 to the death of both figures in 1934 and continues to resurface even now. The question would seem to have been put to rest by a letter from Fraser to the Commissioner of Indian Affairs in 1931, in which he denied ever having seen Two Guns. But Charles Bevard, an auctioneer who had come into possession of a number of Two Guns personal effects which led him into extensive historical research on the subject, suspected that the US Government wanted Fraser to discredit Two Guns as a coin model because they were afraid of the great influence he had on the tribes. The Chief headed a secret organization known as the Mad Dog Society which was attempting to preserve Blackfoot Heritage. Traditional Indian dances such as the Sun Dance and the Ghost Dance, which had been banned, were again being performed after American Indians received blanket citizenship in 1924. Bevard believed that the US Government feared that Chief Two Guns, like his father, might again take the fierce Blackfoot warriors on the warpath in an attempt to regain their land. The item “Rare Painting of Native American Two Guns White Calf by Elizabeth Lochrie” is in sale since Tuesday, January 8, 2019. This item is in the category “Art\Paintings”. The seller is “m_ikram_123″ and is located in Melville, New York. This item can be shipped to United States.